The young filmmaker shoots an experimental  film in a West Berlin commune, but proceedings are disrupted by a surprise, anti-formalist demonstration. 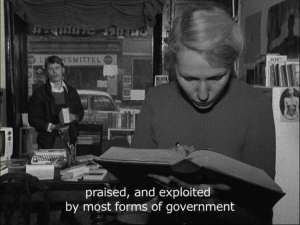 (Part of the novel Friends & Enemies included in a different form in published version. Though events described are partly fictional, a version of the film Drinnen und Draussen exists and is included as an extra on the BFI boxset An Unflinching Eye)

On the 30th December 1973, snow fell. I stood at the window of the commune’s front room in the Stephanstrasse, Moabit, West Berlin and sighed with relief as – despite the cold – a crowd began to form. I had finished editing my window film, Kniephofstrasse, and was now shooting a project using two performers, a pianist and people on the street. Scripted action was located inside, unscripted on the pavement outside where passers-by would, I hoped, stop and watch the actors in the same way that an audience watched them on screen.

“Ready to go in five,” I said turning from the window to Franz Schmidt, the Academy technician now acting as my cameraman.

The DAAD, my bursary benefactor in Berlin, had designated the German Film Academy (DFFB) as my support base, but since my visit there in September to show my early work and talk about Structuralism, the students – Maoists to a man and in line with their Helmsman as anti avant-garde as ever – had voted to withhold assistance from my ‘elitist’ projects. They said I should make agitprop documentaries using conventional cinematic language, not muddle the masses with experimental pieces about how they were being manipulated by Hollywood. Franz had ignored them and persuaded Brigitte, the academy secretary, to act as production manager and a colleague from SFB to sound record. The actors were participating free of charge and Edith from the commune was doing art direction. The other communards, including my friend Reinhardt, were away.

“Director!” the actress called to me. “How real do you want this kiss?”

The high point of the film, and the scene we were about to shoot, involved the two performers kissing each other to the accompaniment of a Mozart slow movement played live by the on-set pianist. Given the crowd outside, I had decided not to do any prior rehearsal, but allow the action to develop of its own accord.

“How real can you make it?” I replied, walking over to a tall, blonde-haired woman in a beige blouse, three-quarter length brown skirt and sensible shoes.

“That depends on Wolfgang,” whispered Ulrike, nodding her head in the direction of the male actor. “And on what you want. You’re the director.”

“I want a real movie kiss that moves the viewer to tears,” I replied. “Bacall and Bogart; Leigh and Gable; Crawford and that violin player in Humoresque.”

“John Garfield,” exhaled Ulrike, rotating a shoulder to relax her diaphragm. “I will be Dietrich. Distant but determined, detached but passionate – ice and fire rolled into one.”

“Good! Shall I warn Wolfgang?”

“No, let him be surprised. I take the initiative, no?”

I crossed the room to Wolfgang, a man of twenty-six with Cary Grant features.

Wolfgang glanced at the crowd outside.

“It will be difficult in front of them.”

“Imagine you’re on stage,” I soothed.

Wolfgang had been harder for me to deal with than Ulrike. He worried that the characters had no personality, that they were cardboard cutouts without motivation or emotions.

“Why are we kissing?” he asked now.

I glanced at my notes.

“‘To signify the similarity of social codes in East and West; to cement – seal with a kiss – two systems that, despite surface differences, seduce and cajole their citizens into obedience and passivity; to emphasise the common bond of bourgeois family values and traditional role-playing prevalent in consumer capitalist and state socialist countries.’”

“Follow Ulrike’s lead,” I coaxed, giving him a pat on the shoulder. “And relax! Imagine it’s your first kiss, the first time a woman’s lips have touched yours.”

“Ready to go in one,” Franz shouted, as he switched on a two-kilowatt light and bathed Wolfgang in a golden glow.

I crossed to the camera and squinted through the eyepiece. The frame was set just as I had requested: Wolfgang in chair, centre left; Ulrike at doorway, far right; pianist at piano in the room behind; fifty odd faces pressed to the window in the background. Perfect! I made my way between Franz and the soundman and plopped down on my haunches beside Theo the piano player – a tall, sixty-year old Prussian junker’s son with tufts of grey hair and a twinkle in his eye that put him somewhere between Einstein and Harpo Marx.

“Give it all you’ve got, Theo. Elvira Madigan and then some”

“Right!” I called, returning to my position by the camera. “Let’s go for one!”

I put a finger to my lips to quieten the crowd, waited for the boom to steady above Ulrike’s head and then raised my hand.

“Scene ten, take one,” Edith called, clapping the board and ducking out of view.

I let her settle and glanced at my leading lady. She gave a nod and my hand fell.

Ulrike dusted. Wolfgang opened a beer and sat back to watch the woman at work. Ulrike turned and their eyes met. A moment’s pause, then Theo sounded the opening arpeggios of the Mozart – gently, seductively. As the melody developed, Ulrike sidled across to the table where Wolfgang sat. The crowd behind the window held its breath.

“May I, schaetzchen?” Ulrike whispered.

Wolfgang patted his knee. Ulrike lowered herself onto his lap. The melody swelled, chords cascaded towards the dominant. Ulrike’s face approached Wolfgang’s. The 10-120 Angenieux Telephoto eased inwards. And, finally – as the melody hit high C, the chord modulated to the tonic and Franz reached the limit of his lens’ prying capacity – the two sets of lips met and the crowd let out an enormous cheer.

Chanting on the far side of the street and banners waved above the crowd’s head: ‘Reflect workers’ struggles – NO art for art’s sake!’ ‘Down with dilettantism and the DAAD!’

The Academy Maoists had arrived. Not content with boycotting the film’s shoot, they had now decided to disrupt it. Shit! Franz, still zoomed in, remained unaware of the disturbance and awaited my signal to cut. I hesitated. The banners and placards advanced, the crowd parted to let them through, the front row turned to check the action behind.

I reviewed my options at stop-frame speed and then tapped Franz on the shoulder.

Franz nodded and signalled to the soundman to raise his boom. Ulrike and Wolfgang broke their kiss and turned to the window.

The crowd, disconcerted by the Maoist presence, began to drift away. The demonstrators lined up along the window, placards and banners pressed to the glass. The chanting began in earnest:

“Imperialism is what we hate, make films workers can appreciate.”

“Theo, open the door!” I shouted at the pianist

Theo’s willowy, aristocratic figure stood up bowed and then opened the door to face the revolutionaries’ wrath. The volume of the demonstrators increased, their gestures grew fiercer. I tensed. Would the mob enter? Rip the film from our camera and beat me – the errant formalist and recipient of imperialist DAAD funds – up? Or demonstrate at a distance and provide a backdrop against which we could continue to film?

“Stop this dilettante crap, leave Berlin and don’t come back!”

Theo retreated to the piano and struck up Mozart’s Marche a la Turque. Ulrike and Wolfgang glanced at each other – too professional to turn and scream ‘Help!’ at the camera, too nervous to outstare the thirty or so demonstrators.

“Go to the door,” I hissed, deciding to up the dramatic ante. “Invite them in.”

“What?” retorted Wolfgang without moving his lips. “You must be joking.”

Wolfgang stayed put. Ulrike headed to the door. She listened to the chants and then leant across and planted a kiss on the cheek of the nearest demonstrator.

“Please,” she smiled, “come in and discuss with us.”

The man continued to chant. Ulrike stepped outside and, squeezing along the front row, repeated kiss and invitation to each of the demonstrators. She then turned to the window, shook her fist and joined in the chanting:

“Imperialism is what we hate, make films workers can appreciate!”

“Stop this dilettante crap, leave Berlin and don’t come back!”

I watched. Perhaps this was the ending I needed. Mrs East joins Maoists in condemnation of decadent art, while Mr West looks on with disdain and the stoicism of repressive tolerance.

Theo completed his march. I prepared to call ‘Cut!’

But just then, sirens sounded. The Maoists glanced from left to right. Ulrike hurried along the frontline, re-entered the commune and closed the door.

“Darling,” she said to Wolfgang. “The police are here.”

A megaphone became audible. The Maoist leader scowled at me, assuming I had called the police. I indicated my innocence with a shrug of the shoulders, pointed at the door and invited the demonstrators to use it. This time there was no hesitation and the nearest man ran in followed by thirty colleagues. Edith guided them through to the courtyard, whilst I shouted at them not to look at the lens – I wanted orchestrated drama now, not fly on the wall documentation.

When the last one had passed through, a policeman appeared, baton drawn.

“Can we proceed?” he asked, raising his visor and wiping sweat from his face.

“Proceed with what?” inquired Ulrike from her position at the table – a born improviser I thought to myself, a performer cool under fire when the curtain fails to fall.

“With the arrest of the people disturbing you,” the policeman panted. “We were called by a neighbour.”

Ulrike bent and whispered something to Wolfgang, who nodded and stood up.

“These people are our friends,” he said, “their presence here is intentional.”

The policeman glanced at the microphone and pointed to the hallway.

“Yes,” replied Ulrike and Wolfgang together. “Thank you.”

The policeman shrugged his shoulders, mumbled something into a radio and retreated.

“Cut!” I shouted, when he had closed the outside door and disappeared. “That’s a wrap!’

“About bloody time too!” Wolfgang exclaimed.

I hugged them both.

“Brilliant! All of you,” I added, turning to the crew. “Fucking brilliant.”

Franz stood up and stretched.

“One meter of film left!” he whistled. “But we got it. The whole thing.”

Edith appeared and announced that the Maoists were now assembled in the courtyard.

“I told them we had to lock the doors to stop the police getting in,” she grinned.

“Are they chanting again?” I asked.

“No, quiet as mice. What shall we do with the bastards?”

I shrugged my shoulders.

I laughed and turned to Franz.

“What do you think, Franz?”

Franz did not reply. He sat unloading the camera’s magazine, his hands moving inside a black changing bag, his forehead furrowed in concentration. When he had transferred the exposed film to an empty can and taped it up to ensure no light could get in, he removed his arms and unzipped the bag.

“A ten minute single take,” he said holding up the can. “Brigitte!”

Brigitte took the can and went to the table to fill in a lab report sheet.

“And the Maoists?” inquired Edith.

“I’ll talk to them later,” replied Franz. “Their action is most unprofessional.”

I sat on the floor, leant back against a wall and glanced outside. Snow falling again; flakes drifting down past street lights, their fluorescent lamps triggered by encroaching darkness: winter in Berlin, Berlin in winter. The filming had gone better than expected – the final scene a vindication of my original idea, the comments on the Maoists banners a neat example of self-reflectivity. And later tonight, a wrap party to reward the team: raucous reminiscences of the shoot’s ups and downs; food, alcohol and wild dancing to the Stones and Lokomotive Kreuzberg. I felt exhausted, but ready to enjoy myself – to be the life and soul of the party, my last duty as director.