The young English filmmaker is (re)introduced to an East Berliner… 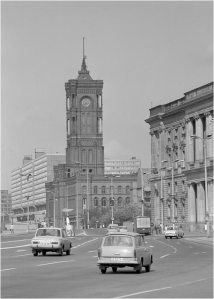 Lothar stared at the clock and held his breath. One minute to go and he would be free. Free to smoke, free to drink and free from the hordes of children and Young Pioneers that he had to show around the Pergamon museum everyday. He would also be free from the watchful eye of his partner of five years, and boss of ten, Ruth – she had a party meeting.

“Have a good evening, Comrade Schiewe!” a colleague called as she passed the door of his ground floor office – or cell, as he preferred to call it.

“The same to you, Comrade Orbanz!” Lothar replied, trying not to release too much breath. You’re thirty seconds early and I could report you to Comrade Ruth, he continued to himself. But I won’t.

He coughed into the undergrowth of his Karl Marx beard and was forced to exhale. He should cut back on smoking, and drinking, but as they were two of the three vices that gave him pleasure in life, he persisted – out of hours, of course. He was not allowed to smoke in his cell, nor drink at lunchtime (Ruth breathalysed him under the pretence of a kiss) and the third vice, sex, was not a viable option within the hallowed walls of the German Democratic Republic’s premier people’s museum. Anyway, Ruth – along with a Brigade Leader in Schwedt, where he gave lectures on socialist realism to steelworkers – provided enough entertainment in that area. There was, however, a fourth activity he enjoyed that was not a vice, approved of by Ruth and on the agenda for tonight. Going to a performance. It didn’t have to be a play, it could be an opera, classical concert, cabaret or even – with enough alcohol to numb aesthetic sensibilities and cotton wool to reduce decibels – one of the rock bands, now officially approved to keep youth ‘Back in the DDR’ and bopping to a dialectical beat.

He put on his coat and peaked Lenin cap, locked the door to his cell and exited the building by a side door that opened on to the banks of the Spree. He lit a cigarette, crossed a footbridge and walked along the river until he reached Friedrichstrasse station, already crowded with homebound commuters. He ordered a beer and Bratwurst from a kiosk by the ticket office, lit a fresh cigarette and stared at the departures board:  S-Bahn services to Mueggensee, Pankow, and Babelsberg; expresses to Warsaw, Prague and Moscow; but no mention of the trains leaving from an inaccessible platform above his head, trains that trundled across the Spree and the wall, past the burnt out Reichstag and into West Berlin – that grey area denoted by a blank on all street maps in the East.

Not a blank to Lothar, though. Before the wall, he had been there many times, but never thought of switching his blue East German passport for a green West German one. For him, East Germany offered security, a steady job and protection from the harsh competitiveness of capitalism – a system that cut no special deals for ageing curators. When the wall went up, he briefly cursed his luck, but soon settled down to the reality of life in a large, reasonably provisioned prison. Having your options reduced, he told friends, did not necessarily make you unhappier. We are, he reasoned, all imprisoned by life, the human condition and the limitations of mortality. Being able to go to Paris and Moscow had its plus side, but also risked diverting a person from more important tasks..

Lothar bit into his sausage and smiled at his erudition and capacity for self-delusion. He did sometimes fancy a coffee on the Ku’dam, of course. And, perhaps, if he lived in the West, he wouldn’t drink so much, or, then again, fearful of losing his job, and seduced into penury by the myriad temptations of capitalism, maybe he would drink more. Either way, thanks to his friend Dieter from West Berlin, he now had the best of both worlds. The state paid him and Dieter brought him catalogues, news of the Western art world and all the material he required for his project ‘Representations of Capitalism in American Comics’. Ruth had obtained official approval for the research, but waiting for Superman to arrive through official channels would have condemned Lothar’s magnum opus to the fate of many things in the DDR – death by inertia. Dieter delivered on time, the party didn’t. In fact, it was Dieter who had bought tickets for tonight – a performance of Goethe’s Faust presented in the Brechtian manner by the Berliner Ensemble. He was coming with a young English filmmaker and Lothar was looking forward to the evening.

He popped a last morsel of sausage into his mouth and stuffed cardboard carton and paper beer mug into a bin beneath the counter. Litter was not a problem in the East – less packaging, better internal policing. That self-regulating mechanism, which ensures people stay in line with the law, functioned more effectively in the land of Marx and Lenin than in the West. Lothar (anarchist by choice, conservative by nature) approved of the sense of social responsibility instilled by the state in its citizens (especially the young) and was glad he did not have to put up with the dirt, noise, disrespect and physical abuse that, according to Dieter and the official party newspaper, plagued some Western cities.

He left the station, followed the direction of the railway as it wound its way westwards on a brick-built viaduct and then, with the wall and a guard tower in sight – floodlit to counter the dying day – turned right into a street that contained the Berliner Ensemble and little else apart from rubble. He entered the building of concrete and stone – a mixture of pre-war decadence and post-war utility – walked across the red-carpeted foyer and entered a dining room, whose high-ceiling, oak tables and upholstered chairs still reflected the artistic freedom and over indulgence of the Weimar Republic. He ordered a beer with a Korn chaser, and sat down at a table near the door. Dieter had not arrived and the only person in the room he knew was a psychiatrist from Pankow – a friend of Ruth’s and a party member. Not suitable company when Western visitors were due. Lothar lit a third cigarette, turned his back on the doctor and surveyed the room.

The Government, he recalled, had presented Brecht with the theatre as part of a package to entice him back to the motherland. Unlike fellow exiles Weil, Eisler, Wilder and Stroheim, Comrade Bert had not enjoyed America.  He had produced some good work there – Mahagonny, for example – even tried his hand in Hollywood, but despite the money on offer he had stuck to his ideals and refused, unlike Comrade Faust, to sell his soul. The founding of Germany’s first socialist state in 1949, and an invitation to work there, gave him the chance of combining art and politics in a practical way and he headed back east with enthusiasm to reap the rewards of Nazism’s defeat by the Soviets.

“And why not?” Lothar mused, as he downed his Korn. “I’d have done the same.”

Of course, there had been difficult moments – especially after the uprising of 1953, when the party ordered Brecht to issue a statement condoning its brutal crackdown. And, were he still alive today, he would have hated the wall and castigated the current conservatism of the party on social, moral and artistic issues. Above all, he would not have approved of the dogma and reverence now attached to his theatrical methods and preferred styles of performance. He had spent his life forging new forms and criticising old ways – the last person to accept fossilisation and the polite applause of party hacks.

“A free spirit, like myself!” Lothar concluded, raising his glass to a portrait of the bard recently repositioned beneath Marx and Lenin. “To your eternal memory, comrade!”

Just then Dieter walked in accompanied by a long haired man in jeans and denim jacket.

As the two friends embraced, the long haired man stared at the bearded East Berliner, a puzzled look on his face. Then, as Lothar turned from Dieter to shake his hand, he smiled.

“Of course, the man in search of vodka. You said we would meet if we were meant to. Extraordinary.”

Lothar took a step forward, peered at Dieter’s friend and then laughed.

“The Englishman from the Ring, who eats no beans – the honourable emissary from Greater Britain! Welcome to our people’s paradise, comrade!”